Daughters of Cornwall by Fern Britton

1918. The Great War is over, and Clara Carter has boarded a train bound for Cornwall – to meet a family that would once have been hers. But they must never discover her secret…

2020. Caroline has spent years trying to uncover the lies buried in her family history. And once she arrives in Cornwall, the truth finally seems to be in reach. Except with storm clouds gathering on the horizon, Caroline soon learns that some secrets are best left hidden…

I literally read this in two sessions. I wasn’t sure what to expect, this being my first Fern Britton novel, thinking it was probably a romance set in Cornwall or a bit like The Shell Seekers (though I loved that book in my thirties). How wrong I was! This is a tale of three generations of incredible women. Clara whose story is told partly by Clara herself and partly by her first and only true love, Bertie, during the First World War. Then it is the turn of her daughter Hannah, from the time she returns home from Penang in Malaya (as it was then called) where she and brother Edward were born, through to her time in the ATS during the second World War until 1947 and the illegitimate birth of her daughter Caroline.

We also hear from Caroline today, who has received a mysterious trunk containing letters, a Bible, a diary, clothes and other items which will tell her the true history of her family… and its secrets. All three women were born out of wedlock, but it didn’t stop them from being strong and courageous.

This book is truly remarkable. There are no holds barred when we are introduced to the horrors of the trenches, of the death, the rats, the bodies, the mud.

‘Mud’, says Bertie, ‘It was everywhere. In my eyes, my nose, my mouth, my ears. Men were going mad…. calling for their mothers……’

The Second World War is not described in such horrific and graphic detail, but this is partly because the characters who were involved such as Hannah’s brother Edward in the RAF and Hannah in the ATS were fighting at more of a distance, while in Bertie’s case he was right in the thick of it, in the trenches, fighting at close quarters. And we see it from his point of view and in his beautiful letters to Clara.

I loved Hannah. She is so brave and resourceful. I wonder if I would have been like her. I hope so.

There is some romance too, but it takes place during both world wars when relationships developed very quickly, as partners had to return to the front or the air and knew that they might never come back.

I can’t praise this book enough. It has everything. Tears of sadness, tears of joy.

I only had one reservation about the unfolding of the story. Something that made me very sad, but that is the reality of what often happened, but I wish it could have been different. That’s all I’m saying. You’ll have to read it and decide for yourselves. 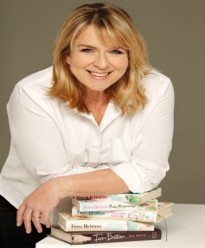 Born in London, into a theatrical family, Fern started her professional life as a stage manager. Theatre life was great fun but within three years, in 1980, she graduated to television and became a presenter on Westward Television. Here she achieved her ambition of living in Cornwall. Since then television has been her home. She spent 14 years as a journalist before presenting Ready, Steady, Cook for the BBC. This Morning for ITV came next where she won several awards and became a household name. Her interview programme Fern Britton Meets had guests including Tony Blair, Archbishop Desmond Tutu, Dolly Parton and Cliff Richard. Fern presented The Big Allotment Challenge (BBC2), For What It’s Worth (BBC1), Culinary Genius with Gordon Ramsay (ITV)

Fern’s novels are all set in her beloved Cornwall. Her books are cherished for their warmth, wit and wisdom, and have won her legions of loyal readers. Fern was a judge for the Costa Book of the Year Award and a supporter of the Reading Agency, promoting literacy and reading.

Fern turned her talents to acting last year when she starred as Marie in Gary Barlow and Tim Firth’s award-winning musical Calendar Girls.

Fern has twin sons, two daughters and lives in Cornwall in a house full of good food, wine, family, friends and gardening books. She has a motor cycle licence, an honorary doctorate for services to broadcasting and charity, and is a member of Mensa!

2 Comments on “Daughters of Cornwall by Fern Britton”