The Vow by Debbie Howells

Everything was perfect. And then her fiance disappeared…

Two weeks before her wedding, a stranger stops Amy in the street and warns her she’s in danger. Then that night, Matt, her fiancé, doesn’t come home. Desperate, Amy calls the police – but when Matt fails to emerge, she’s forced to call off her wedding day. Then another man is reported missing, by a woman called Fiona – a man meeting Matt’s description, who was about to leave his fiancée for her. He was supposed to be moving in with her – but instead, he’s vanished.

Amy refuses to believe Fiona’s lover can be her Matt – but photos prove otherwise, and it soon becomes clear that Matt has been leading a double life. As the police dig deeper, two conflicting, yet equally plausible stories emerge from two women who allegedly have never met. The wedding day never happened. But the funeral might. 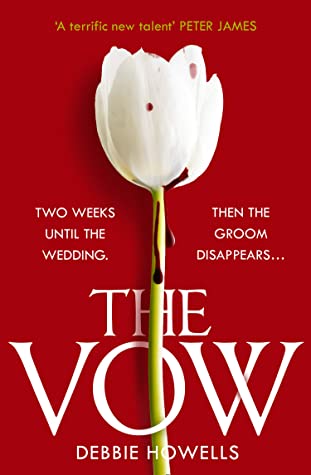 This was a riveting read, building and building with more and more secrets and lies. Told from the point of view of Amy, Fiona, and Amy’s daughter Jess, it’s hard to know who is lying.

As more information comes to light, we jump back to 1996 when the tragic death of teenager Kimberley, followed by the suicide of her boyfriend Charlie, is revealed. Are they connected and if so how?

The plot is very clever, though about two-thirds of the way through I guessed one particular connection,  but I couldn’t be sure so it didn’t spoil it for me at all. My main gripe is with the police questioning. I thought they were very hard on Amy and some things I questioned as to whether they would really say or do that. Also I don’t believe in coincidences and surely they must have realised certain things were linked. It took Jess to discover a lot of information that the police failed to find. In this day and age it should have been easy or maybe they just just didn’t look hard enough.

The idea of having two female protagonists (three if you count Jess who really is the stand-out hero) made this different from other psychological thrillers I have read in recent years (and I have read a LOT). Certainly an exciting and entertaining novel.

Many thanks to NetGalley for an ARC in exchange for an honest review.

Debbie Howells is a florist and lives with her family and assorted animals in Sussex. She is the author of The Bones of You and The Beauty of the End. Her latest novel is The Vow.

← The Truants by Kate Weinberg
The Last Wife by Karen Hamilton →